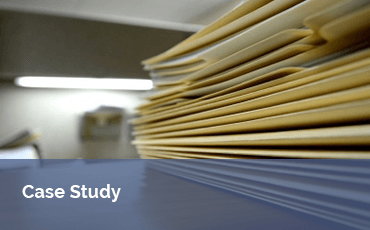 Until June 2006, all filings were submitted in multiple copies on paper.  They were sent by regular mail, overnight shipping, or messenger delivery.  CPUC staff reviewed the documents for compliance with various rules and entered the relevant information into the CPUC’s Case Information System.  Copies of filings were routed to appropriate staff and the originals filed in the Central Files Office. Unless they were scanned, documents were generally not available on the CPUC website.

The CPUC, like many state agencies, was under pressure by the public and the California Legislature to improve public access to the documents that CPUC relies on to make decisions.  While electronic filing was typically utilized by the courts, it looked to be a good fit for an administrative agency like the CPUC as well.  CPUC is a quasi-judicial agency with numerous proceedings, rules, and procedures.

The CPUC expected the benefits from e-Filing to accrue for both filers and the Commission.   Filers would save on the preparation, printing, and shipping costs associated with submissions.  They would also have additional time to prepare and submit filings before deadlines, since printing, assembly, and shipping would no longer be a factor.  The e-Filing process would cut CPUC staff time and costs associated with filing, processing, and storing documents.  It would also reduce the effort and cycle time for handling exceptions such as requesting and reprocessing re-submitted filings.

The question the CPUC faced was how to implement an e-Filing system.  The CPUC decided to adapt the 2GEFS standard promulgated by the California Administrative Office of the Courts.

In the absence of a national standard for e-Filing, the California courts had developed Second Generation Electronic Filing System or 2GEFS, which is based on industry XML standards.  The CPUC decided that the application should be 2GEFS compliant so that filers and the CPUC would not be locked into relying on one proprietary system.

Michelle Cooke, Assistant Chief Administrative Law Judge, was the senior manager on e-Filing project.  “Because state government agencies have not had much experience with e-Filing, risk reduction was at the top of our list of requirements,” she stated.  “We took three steps to reduce risk:  We adapted a known standard.  We used a vendor who had already had success implementing e-Filing, and we relied heavily on internal staff for process flow design.  Our users didn’t have to change the way they worked.”

Work on the project began in July 2005.  The CPUC’s Docket Office worked with the e-Filing team to design the “Clerk’s Module”, which is the screen where their work is completed.  Initial testing with internal CPUC filers was conducted in May 2006.  In June 2006, the CPUC added one high-volume external filer to the testing protocol.  Within three weeks the high-volume filer had completely cut over to electronic filing.

The project cost, including professional services and software totaled just over $400,000.  Internal support included three members of the CPUC IT staff who were responsible for supporting integration, quality, and testing.

The impact of the e-Filing system on CPUC staff exceeded expectations.  User adoption of e-Filing has been fast.  As a result of the decrease in paper volume, CPUC redeployed one Central Files clerk to higher priority work. Costs for storing paper documents have been reduced, and the space required to house and archive documents will be significantly reduced over time.

An unforeseen result of e-Filing is the improvement in the quality of processing filings.  In the e-Filing process, most data is input by the filers, not CPUC staff.  Upon acceptance of a filing, the data input by the filers is reviewed by the Docket staff and is automatically input into CPUC case and document management systems. An automated notification is sent to the filer and internal staff, and documents are posted to the public website without additional staff work.

The time and effort required to correct, resubmit, and process an acceptable e-Filing is greatly accelerated because rejections, corrections, and resubmissions happen right away.  As a result, the Docket Office staff, whose job it is to ensure compliance with Rules of Practice and Procedure, can focus on accuracy and consistency of the data, and compliance with filing rules, rather than data input and paper management.

“When e-Filing was first implemented,” said Cooke, “efficiency improved dramatically because the filers were mainly large firms with users who were trained on the CPUC e-Filing system.  We received few errors on the filer side. As low volume and one-time filers have come onto the system, filings contain more errors, which have slowed processing time somewhat.  Overall, filing efficiency is much improved over the paper-based system and quality is much improved.”

Perhaps the biggest impact of e-Filing has been for filers. Prior to e-Filing, multiple copies of documents had to be prepared by each filer and delivered to the Docket Office by the filing due date. With e-Filing, copying and delivery of documents is no longer required, eliminating copying costs, delivery fees or postage, and giving filers another day to work on the substance of their filing. Filers can also file from anywhere, giving them added flexibility, which is especially helpful for pro per and solo practitioners. In addition, because adoption of e-Filing has been so high, parties can rely on the web to access documents, reducing the need for storing many large documents on their own systems.

You can view the CPUC e-Filing Web site at www.cpuc.ca.gov.  You can learn more about the California 2GEFS e-Filing standard at the Judicial Council of California Web site:www.courtinfo.ca.gov/programs/efiling/.  General Networks Corporation’s Web site is www.gennet.com.  Essential Publisher’s Web site is www.epubs.org.